Quantum sensors achieve outstanding properties in the combination of spatial resolution and sensitivity. Different sensor principles can be combined and allow for highly compact designs, up to and including complete systems.

Quantum sensors based on diamond

At Fraunhofer IAF, we develop quantum sensors based on diamond, which can detect magnetic and electric fields with a spatial resolution of a few nanometers down to single electron and nuclear spins. Diamond’s outstanding physical properties mean that diamond quantum sensors function at room temperature – which is ideal for industrial applications.

In the field of quantum sensing, Fraunhofer IAF uses its many years of expertise in the generation of nitrogen vacancy (NV) centers in diamond: These NV centers are created when two adjacent carbon atoms in the diamond lattice are removed and one of them is replaced by a nitrogen atom. The excess electron from the nitrogen atom falls into the void. This electron has a magnetic moment which, once it has been oriented, can be used as a magnet – even at room temperature.

Our know-how includes the generation of NV centers in three dimensions:

At Fraunhofer IAF we are developing diamond with a single nitrogen vacancy center in the tip for high-resolution scanning probe quantum magnetometry. For the first time, it is now possible to measure magnetic field distributions at the atomic level, which has not been possible with previous methods. The current flows of micro and nanoelectronic circuits can be mapped with high resolution, for example, which is very useful for failure analysis. Furthermore, these kinds of quantum sensors can be used for GPS-independent navigation, which opens up applications for autonomous driving, for example.

For the production of diamond magnetometer tips, Fraunhofer IAF has an excellent clean room infrastructure that allows for semi-industrial manufacturing processes. In addition to state-of-the-art lithography tools such as laser lithography and electron beam lithography, extensive expertise has been built up in the dry chemical structuring of poly- and single-crystalline diamond. In recent years, development at Fraunhofer IAF has increasingly focused on the homoepitaxy of extremely pure diamond including isotopically pure 12C diamond layers, as well as p- and n-doping of diamond. In the area of NV centers in diamond, we have developed the technology for the targeted generation of these centers at defined points in diamond tips, and have perfected the dry etching processes for the production of diamond tips. It is precisely this ability to set a defined charge state that is key to the realization of reliable quantum sensors based on NV centers in diamond.

We develop volumes of NV-doped diamond for laser threshold magnetometry. This is a worldwide new research approach using a material as laser medium that has an optically detectable magnetic resonance. The material properties of diamond with a high density of NV centers make it particularly suitable for use as a laser medium. It can theoretically achieve higher signals and a higher contrast, which leads to much more precise measurement results.

Fraunhofer IAF has been working on the implementation of the concept for two years. IAF benefits from the synergy of the three core areas of expertise, namely diamond growth, optoelectronics or laser technology and high-frequency electronics. The laser threshold magnetometer will be used to measure the smallest magnetic fields, such as those generated in neural networks or by brain waves, thus opening new doors in medical diagnostics.

Our quantum sensing measuring principles and their properties

Several quantum magnetometers are available for customers to evaluate the innovation potential of quantum sensors for their specific requirements.

In the »QMag« project, IAF is developing quantum magnetometers for industrial applications together with five other Fraunhofer institutes and three universities.

Find out more about our research in the field of quantum sensing. 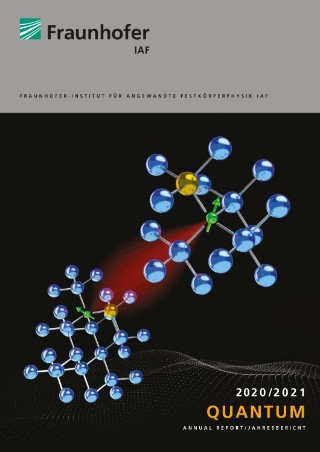 Learn more about our activities in the field of quantum systems in our annual report.